Skip to content
Posted inTechnology
Posted by By Karishma Karnwal October 17, 2016No Comments

IT professionals who have yet to be convinced that API management could be useful need look no further than Google’s plan to acquire Apigee, an API management platform. It’s the latest in a string of similar offerings that highlight the importance of application programming interfaces in today’s IT organization.

Describing the proliferation of application programming interfaces (APIs) as a means for connecting enterprise services, consulting firm PwC in 2012 called the confluence of social networking, mobile computing, analytics, and cloud computing “a perfect storm of challenges for enterprise IT groups.”

APIs allow enterprises to connect their software and services to offerings from third parties, partners, and customers. They define the rules of the road for commerce and interaction among applications. But making those connections and doing it in a way that conforms with IT requirements can be difficult.

PwC recommended enterprises look for API management platforms to bring some order to the complexity involved in dealing with the growing number of APIs. The technology industry appears to be taking that advice to heart.

Forrester, another consulting firm, last year forecast that US companies will spend almost $3 billion on API management over the next five years, with annual spending expected to quadruple by the end of the decade, rising from $140 million in 2014 to $660 million in 2020.

API management platforms give organizations control over how their APIs are delivered, managed, and analyzed. They enable capabilities such as API rate limiting and access control, to name a few. 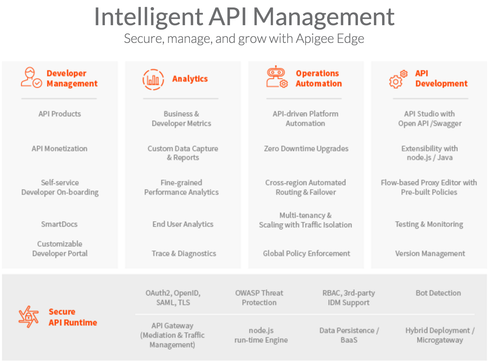 IT professionals who have yet to be convinced that API management could be useful need look no further than Google’s plan to acquire Apigee, an API management platform, for evidence that APIs can benefit from attention.

“The addition of Apigee’s API solutions to Google cloud will accelerate our customers’ move to supporting their businesses with high quality digital interactions,” said Google SVP Diane Greene in a blog post. “Apigee will make it much easier for the requisite APIs to be implemented and published with excellence.”

Google is a bit late to the API management party, which ramped up in 2013 with CA acquiring Layer 7 and Intel acquiring Mashery (only to sell it to TIBCO last year). Other partygoers include 3scale, Akana, Axway, IBM, HP, Mulesoft, and Oracle, not to mention Amazon’s API Gateway.

Forrester has predicted a shakeout, based on its finding that only 40% of enterprises are advancing digital initiatives relating to mobility, IoT, and big data to the extent that API management investment would be beneficial.

Even so, Google gains relationships with Apigee’s customers, which include AT&T, Bechtel, Burberry, First Data Live Nation, and Walgreens, and Google’s cloud customers will be able to look forward to using Apigee’s tools to take control over the APIs at their organization.