Skip to content
Posted inSocial
Posted by By Karishma Karnwal October 21, 2016No Comments

At first blush, the steam-cleaning business — which Dupéré launched with two friends in 2006 — looked successful. Customers were happy with their service, which removed gum and other gunk from public places such as the airport and theaters. References kept new business rolling in.

Les Dégommeurs had one big problem: While it was bringing in a ton of cash, a lot of it was lost due to an inefficient operation. Compounding the issue, the Montreal ’treps had no strategy to remedy that. “We really didn’t market ourselves in a way that was conducive to growing our business,” Dupéré says. “We were taking one job here, another job there — we didn’t have a clear and concise business plan.

In 2008, after two years of stumbling along, Dupéré and his cofounders sold the company and took stock of lessons learned. Later that year, they scrapped their original business idea and opened a more profitable one, Dupray, which sells home, commercial and industrial steam cleaners and steam irons. Today the company brings in $13 million a year in revenue, selling to individuals, restaurants, hotels, hospitals, auto dealers and real estate and construction companies in North America and Europe.

Dupéré is no anomaly. Behind many successful entrepreneurs lies the rubble of a promising venture that hit a wall or, worse, went out of business. Some may see it as a rite of passage. Others call it myopic stupidity by founders who don’t know any better. But whatever happened, the outcome is a tested and hardened business­person with the experience to make everything that comes afterward work. Follow their lead, and perhaps you can skip the painful parts and go straight to success.

Selling a product that no one wants to pay for is the granddaddy of business killers. That was PreferredTime’s problem. The Boston-based software platform made it easy for Big Pharma sales reps to set up meetings with doctors too busy to answer their messages. Doctors and reps loved the service. According to founder Stefania Mallett, a third of U.S. pharmaceutical reps used it. Investors were enthralled, too, so much so that they poured $5.6 million into the venture from 2004 to 2007.

There was a catch, however: Although reps could obtain more of PreferredTime’s features through a $25 monthly subscription, most of them were happy to stick with the platform’s free version. And it didn’t help that three years into it, the startup had yet to sign up enough doctors and reps to turn a profit. “Our biggest mistake was that it was a ‘boil the ocean’ company,” Mallett says of the business model that chased scale over profits. “We would have needed a much bigger investment to reach a profit.”

Mallett pulled the plug in 2007, but she was able to salvage her next venture from PreferredTime’s remains, forming ezCater. The idea evolved from pharma reps’ repeated requests for her to build a simple way to provide meals for their meetings with doctors. The catering platform, which lets businesses order meals for any meeting, opened its doors a week after PreferredTime went dark. Mallett not only enlisted many of PreferredTime’s pharma reps as early testers but also won them as paying customers.

This time Mallett has raised $35 million from investors. Today the 160-employee internet company connects startups and Fortune 500s in nearly 23,000 U.S. cities with caterers who can provide meals for on-site and off-site meetings. The platform partners with more than 47,000 restaurants and caterers that clients like Google, Microsoft, Uber and Verizon can choose from. “And it all started because we failed at something else,” Mallet says.

For Mark Carpenter, the hard-fought lesson of his first venture was that undercutting the competition on price isn’t necessarily a winning long-term business strategy. He bought Whatco Roofing and Sheet Metal in Tualatin, Ore., back in 1981 to cater to commercial builders who needed roofing. No repairs, no custom work, no residential jobs — easy, he thought. “But it was all contractors looking for the cheapest possible bid,” Carpenter says. And lowball bids meant he couldn’t give customers his best work, which also meant most didn’t hire him a second time. Five years in and $300,000 in debt, Carpenter liquidated the company and took a day job.

We have customers who have been with us for 20 years and continue to hire us.”
— Mark Carpenter,Columbia Roofing

In 1996, Carpenter decided to try owning a business again, launching Columbia Roofing & Sheet Metal. This time, instead of focusing on new construction, he offered repairs, reroofing, sheet metal work, seismic retrofitting and other custom services to commercial building owners. All the while, he stuck to his pricing, refusing to play the lowball game.

“There are people who shop at Nordstrom for its quality and service, and people who shop at Walmart for its prices,” Carpenter says. By earning the trust of the Nordie’s crowd, he’s built a $10 million company with customers in Oregon, Washington, Idaho and California. “We have customers that have been with us for 20 years and continue to hire us.”

By his own admission, one of the biggest lessons Dupéré learned from Les Dégommeurs was the need to automate scheduling, payments and customer communications. “We were booking appointments by scribbling them down on paper, whiteboards and even napkins,” Dupéré says of his failed steam-cleaning service. “We definitely didn’t utilize the full power of our smartphones.”

Sometimes the company’s schedulers would alert the cleaning team to the day’s jobs by text or email. Other times the cleaners wouldn’t know they needed to be across town in mere minutes until they arrived at the office. Cleaners often showed up late to appointments; sometimes they missed them altogether. “That’s a level of unprofessionalism that’s unacceptable,” Dupéré says. “It’s the type of thing that hurts your business.” 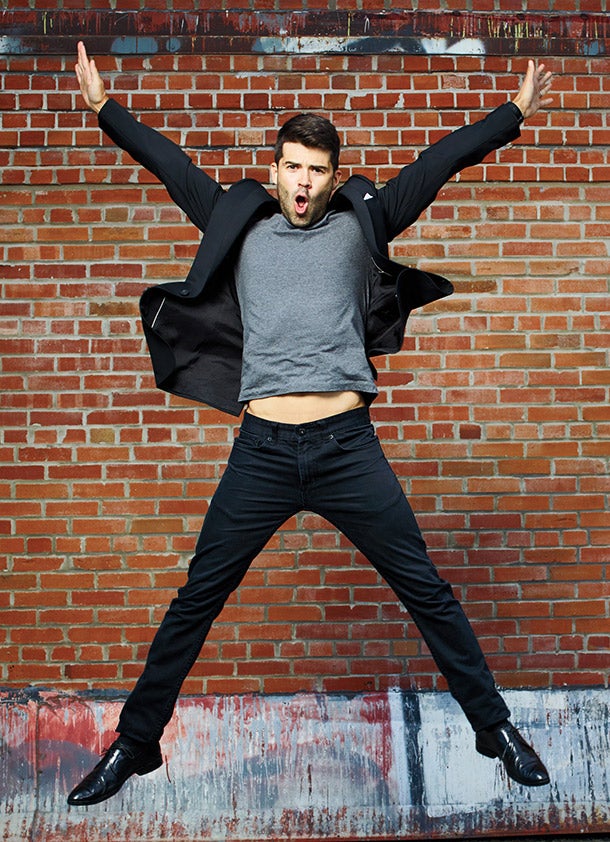 This is what success looks like: Dupéré at home in Montreal.

The company’s need to be paid in cash or by check didn’t help either. Checks were lost or misplaced, forcing Dupéré to go through the mortifying task of asking a customer for a new check. And without any database or customer relationship management software, Les Dégommeurs had no uniform way to stay in touch with customers, offer them periodic promotions or follow up on new leads.

Dupéré was determined to avoid those same mistakes when he launched Dupray. He wasted no time investing in CRM, scheduling, payment, project management and other productivity software. “Technology keeps us organized,” he says, which has helped him manage 30 employees in six countries. “It keeps us in complete control of our hours, where we have to be, what we have to do and who we have to see.”

Jeff Platt, CEO of Sky Zone Trampoline Park, takes organization one step further, using his CRM technology for customer feedback, which he in turn relies on to make sure his business is as profitable as possible. At the start of the year, Platt began using an email survey application that customers can complete after visiting one of Sky Zone’s activity parks scattered around the globe. Besides writing reviews, customers rate each park on the fun factor, perceived value and likelihood of recommending it to friends.

“An app on my phone lets me see how our customers score us across all our locations,” Platt says. ( WE TOO AT pRM INFOTECH HAVE CREATED THE MOBILE APPLICATION FOR FEEDBACK GENERATION, CONTACT US TO KNOW MORE)

Armed with this real-time feedback daily, he can make adjustments to his business immediately. Complaints about the old, dingy bathroom at one of his parks quickly led to a $15,000 renovation. Reviews of the location improved, as did revenue. Likewise, repeated requests for more park activities convinced Platt to add climbing walls and ninja warrior courses to various locations, features that cost $25,000 to $300,000 apiece to build. But for Platt, the resulting five-star reviews of the upgraded spaces justified the expense.

“It doesn’t matter what you think as a business owner,” Platt says. “It only matters what the customer thinks. And when you’re not getting that feedback in your face every day, you won’t take action.”

This is a far cry from how Platt operated in his previous business, a 17,000-square-foot trampoline arena for professional athletes that his father spent two years and $2.5 million building only to realize there wasn’t enough of an audience for the acrobatic sport he had dreamed up and hoped to popularize. In contrast, Sky Zone, which his father originally founded in 2006, now operates 150 trampoline parks around the world, with annual revenues of roughly $315 million.

Your business is only as good as the team you assemble. Marco Perry learned this firsthand when forming his product design firm with friends in 2001. All five partners were highly creative designers, but they didn’t have a business bone among them. Their growth strategy was nonexistent. Same goes for their accounting, forecasting, sales and marketing expertise.

“We had no complementary skills, no clearly defined roles or responsibilities,” Perry says. “There was no real path to success. We tried a little bit of everything to see what would stick. We were basically masters of none.”

Perry admits that this amalgam of designers was little more than a freelance collective or a glorified coworking arrangement. By 2005, after four years of treading water, the partners disbanded. Perry struck out on his own, this time with his wife, who had an MBA, and another partner. They founded Pensa, the Brooklyn-based product design and invention firm he runs today. Thanks to his new cofounders, Perry now had partners who compensated for his operational blind spots. He had a business plan, a brand and a clear road to profitability. It was the smartest move of his career.

Today the 16-employee firm makes millions of dollars annually (Perry won’t be more specific), working with clients like OXO, Pepsi and Google and developing everything from smart baby monitors to high-end urban bicycles.

This same approach to partners applies to investors, according to Robert Thompson, founder and CEO of Punch Bowl Social, a U.S. chain of gastrodiners — gaming venues that feature farm-fresh food, craft drinks and games like bowling, shuffleboard, pinball and Skee-Ball. “Not all money is good money,” he says. “There are a lot of pirates out there.”

Thompson should know. Before launching his “eatertainment” company in 2012, the Denver-based entrepreneur spent the better part of a decade running Cocktail Concepts, a restaurant company he founded that at its height ran six eateries in three states. But in the early 2000s, one restaurant he had self-financed went under. Another saw a 60 percent drop in customers.

Suddenly, keeping the doors open put Thompson neck-deep in debt. To make matters worse, one of his investors attempted to gain control of the company. “I had a pirate in my midst,” Thompson says. “I found myself not only trying to save my business but trying to figure out a way to step outside the traps this guy was laying for me. I was fighting a war on two fronts.”

In 2004, Thompson shuttered Cocktail Concepts and declared bankruptcy, losing his home and cars in the process. He credits the offending investor with helping escalate his company’s fall, a tough blow he is determined to not repeat. With Punch Bowl Social, he diligently researched each of the angel investors who put up the $4.3 million he used to launch the business. He’d learned the hard way that his business and his home depended on it. It has paid off. The company claims each of its current locations earns $7 million to $8 million in annual revenue.

“You really need to have a meeting of the minds with your investors before you allow them in,” Thompson says. “Otherwise, you can spend more time protecting your company than you do running it, and that’s bad for everyone.”

Facebook Opens Marketplace to Take on eBay and Craigslist