Skip to content
Posted inTechnology
Posted by By Karishma Karnwal September 26, 2016No Comments Today, from the outsource we are here to discuss about the understanding of HTTP APIs.

For the last few years, whenever somebody wants to start building an HTTP API, they pretty much exclusively use REST as the go-to architectural style, over alternative approaches such as XML-RPC, SOAP and JSON-RPC. REST is made out by many to be ultimately superior to the other “RPC-based” approaches, which is a bit misleading because they are just different.

This article discusses these two approaches in the context of building HTTP APIs, because that is how they are most commonly used. REST and RPC can both be used via other transportation protocols, such as AMQP, but that is another topic entirely. Don’t forget to read out another blog what are they for??

REST stands for “representational state transfer,” described by Roy Fielding in his dissertation. Sadly, that dissertation is not widely read, and so many people have their own idea of what REST is, leading to a lot of confusion and disagreement. REST is all about a client-server relationship, where server-side data are made available through representations of data in simple formats, often JSON and XML. These representations for resources, or collections of resources, which are then potentially modifiable, with actions and relationships being made discoverable via a method known as hypermedia. Hypermedia is fundamental to REST, and is essentially just the concept of providing links to other resources.

Beyond hypermedia there are a few other constraints, such as:

These constraints (plus a few more) allow the REST architecture to help APIs last for decades, not just years.

Before REST became popular (after companies such as Twitter and Facebook labeled their APIs as REST), most APIs were built using an XML-RPC or SOAP. XML-RPC was problematic, because ensuring data types of XML payloads is tough. In XML, a lot of things are just strings, so you need to layer meta data on top in order to describe things such as which fields correspond to which data types. This became part of the basis for SOAP (Simple Object Access Protocol). XML-RPC and SOAP, along with custom homegrown solutions, dominated the API landscape for a long time and were all RPC-based HTTP APIs.

The “RPC” part stands for “remote procedure call,” and it’s essentially the same as calling a function in JavaScript, PHP, Python and so on, taking a method name and arguments. Seeing as XML is not everyone’s cup of tea, an RPC API could use the JSON-RPC protocol, or you could roll a custom JSON-based API, as Slack has done with its Web API.

In JavaScript, we would do the same by defining a function, and later we’d call it elsewhere:

The idea is the same. An API is built by defining public methods; then, the methods are called with arguments. RPC is just a bunch of functions, but in the context of an HTTP API, that entails putting the method in the URL and the arguments in the query string or body. SOAP can be incredibly verbose for accessing similar-but-different data, like reporting. If you search “SOAP example” on Google, you’ll find an example from Google that demonstrates a method named getAdUnitsByStatement.

Even though this payload is much easier, we still need to have different methods for getAdUnitsByStatement and getAdUnitsBySomethingElse. REST very quickly starts to look “better” when you look at examples like this, because it allows generic endpoints to be combined with query string items (for example, GET /ads?statement={foo} or GET /ads?something={bar}). You can combine query string items to get GET /ads?statement={foo}&limit=500, soon getting rid of that strange SQL-style syntax being sent as an argument.

So far, REST is looking superior, but only because these examples are using RPC for something that REST is more adept at handling. This article will not attempt to outline which is “better,” but rather will help you make an informed decision about when one approach might be more appropriate. 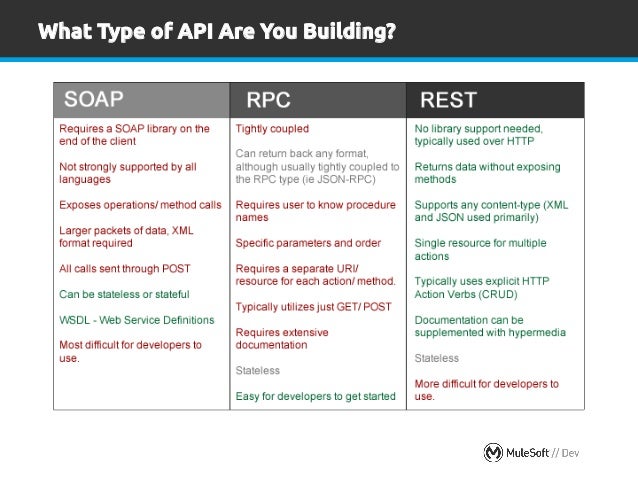 Knowing the differences between REST and RPC can be incredibly useful when you are planning a new API, and it can really help when you are working on features for existing APIs. It’s best not to mix styles in a single API, because this could be confusing both to consumers of your API as well as to any tools that expect one set of conventions (REST, for example) and that fall over when it instead sees a different set of conventions (RPC). Use REST when it makes sense, or use RPC if it is more appropriate. Or use both and have the best of both worlds!

What Are RPC And REST For?