Bolt Threads aims to corner the next big thing in textiles: spider silk.

This story appears in the October 2016 issue of Startups.

Whether you think spiders are cool or they freak you out, the silk they produce is amazing stuff. Strand for strand, it is lighter and tougher than steel and can be as strong as synthetic fibers like Kevlar. For decades, researchers have talked about using the wonder material in the construction of lightweight, bulletproof armor for soldiers and breathable fabrics for athletes, as well as for medical applications like mending bones and covering wounds. Problem is, despite all the futuristic daydreaming, no one was able to figure out how to get the thousands of arachnids needed to make even a small amount of usable silk to cooperate.

When Dan Widmaier was wrapping up his Ph.D. at the University of California, San Francisco, where he studied spider proteins, he and a pair of colleagues had a brilliant idea. Why not sidestep the creepy crawlers altogether and make synthetic spider silk? In 2010, Widmaier, David Breslauer and Ethan Mirsky took the next step and launched Bolt Threads in Emeryville, Calif.

Back then the trio didn’t know if producing synthetic spider silk fabric was even possible. Many brilliant people had tried and failed. The issue, as Widmaier saw it, was the need for the bioengineering industry to catch up. “I knew if we could make spider silk, the market would buy it,” he says. “The problem was technical; I knew the tools were getting better and the cost was dropping. I figured if we got started earlier, we’d have the wind at our back when the technology finally came through.”

It was a challenge worth pursuing. The U.S. Department of Commerce reports that the technical textiles market will be worth $160 billion by 2018. The size of that market helped Bolt Threads secure $50 million in venture funding last May and sign a deal with outdoor clothing giant Patagonia to design and manu-facture future spider silk products.

At the heart of the business is a process that has more in common with breweries than textile mills. Bolt’s founders figured out how to insert the gene sequences from spiders that produce silk into a yeast. The process is very similar to brewing beer, with only a slight variation in ingredients: Combine water, yeast, sugar and salts in a vat. The yeast ferments, producing the spider silk proteins in a liquid form. Engineers then wet-spin the silk proteins — a process used to make textiles such as rayon — generating strands of silk that can then be woven into fabric.

Bolt is not the only company that is in the game. Michigan-based Kraig Biocraft Laboratories is using genetically modified silk worms to produce spider silk and is working with the U.S. Army to test military uses for the fabric. German company AMSilk is using modified E.coli bacteria to produce spider silk, mainly for medical applications and cosmetics. A Swedish company called Spiber made a prototype jacket last year, and a Japanese firm is working with Toyota’s suppliers to design car parts made from spider silk. 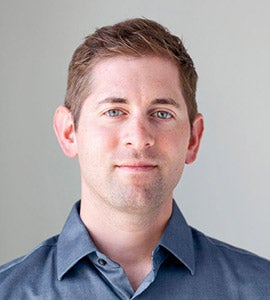 “I knew if we could make spider silk, the market would buy it. The problem was purely technical; I knew the tools were getting better and the cost was dropping.”
— Dan Widmaier, CEO, Bolt Threads

Widmaier, however, says he has no interest in going after such specialized customers. His aim is to be the first to produce spider silk at scale and for a reasonable cost with a focus on apparel and consumer products. Another differentiator, he says, is that Bolt’s fabric can be tuned, with weaves that focus on breathability and others woven for strength, stretch or softness. Bolt’s founders believe that performance combined with sustainability — the product is natural, doesn’t use petroleum products like other polymers, and can be melted down and re-spun — will be very appealing to consumers.

“If you take the long view here, we’re in a golden age of technology in athletic wear and footwear,” says Matt Powell, a veteran sports industry analyst with the NPD Group. “I am amazed how many new ideas are coming out on a daily basis. And there is absolutely a place for spider silk fabrics.”

“If you take the long view here, we’re in a golden age of technology in athletic wear and footwear. And there is absolutely a place for spider silk fabrics.”
— Matt Powell, NPD GroupAdds Widmaier: “The exciting thing here is that we can make multiple spider silks. This promises a renaissance of performance materials launched at a rapid clip. We don’t care if we’re the first to market. We want to be the first to launch a profitable product.”

Why Some Websites May Not Be Working for You Today

What are Small business demanding from IT companies??